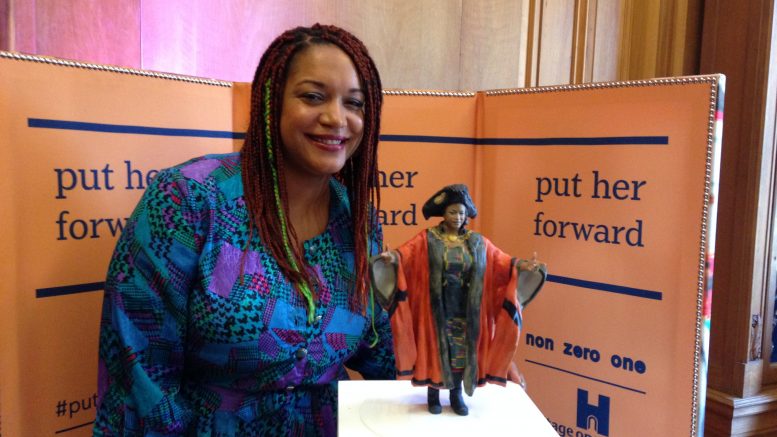 This week, Caroline Lucas has gifted her column to Cleo Lake, a Green Party councillor in Bristol.

Lucas writes: I wanted my column to talk about Black Lives Matter, but more than that, I wanted to give a platform to someone who has been an inspiration to me, and who has lived through the racial discrimination of past decades and knows why, sometimes, toppling statues is not obliterating history, it’s acknowledging what really needs to be remembered.

From the age of five, I would walk past the fee-paying Colston Girls School with my mother. ‘I’m going to go there,’ I would say and she would laugh, knowing there was no way we would be able to afford the fees.

At age 11, I passed the exam and was awarded an assisted place to start at that very school, and entered a completely different world.

During most of my school career, I was never really aware who Edward Colston was in his entirety.

Every November I would join my classmates in the annual commemoration of him. I’d have to wear a hat and my mum would rush around trying to find the bronze chrysanthemum, his favourite flower, to pin to my lapel.

We would file in and listen to his will being read out and hear about his charity work in our city. He was presented as if he was the saint of Bristol.

Standing there in our school uniforms, there was no mention of the people captured in West Africa, branded with the initials RAC (Royal African Company), before being shackled and driven aboard ships to America and the Caribbean.

No mention of the people thrown overboard or the human cost that enabled Colston’s riches to be used across Bristol.

It was during my A-Levels that I first remember seeing a protest on the local news with a large group of African heritage people demanding that the statue of Colston should be removed.

When I raised this as a question in my English literature class I felt I was ridiculed, put in my place and silenced by my tutor, who was also the head-teacher of the school.

This had a profound effect on me as I sat as a teenager trying to find myself, silently crying in front of her and my peers. I can now see that this was an extreme end of what might now be termed a microaggression.

Years later, in 2015 I was involved in an art installation called ‘BS2 Resist and Revolt’, which was a mock pirate radio station. On the show I happened to mention that I had attended Colston Girls School, and that we had been made to commemorate the infamous enslaver every year.

A few of us present decided to go and protest outside the annual Colston Commemoration staged at Bristol Cathedral.

And so the campaign group ‘Countering Colston’ was born – a group committed to dismantling the public celebration and cult of a man responsible for the death, torture and misery of thousands.

Learning about Colston’s past and reading books like Black Americana, which my dad inspired me to read just before his death when I was 10, have cemented in me a sense of justice.

The book charted the highly likely history of my ancestors, who were captured and enslaved by the Portuguese, and the subsequent experience of Black Americans. Of course I know now that my history goes back before enslavement and psychologically, I think that is important.

I don’t remember experiencing overt racism growing up. My mum is white British and so is my older sister and I grew up ‘half caste’, which is for many a highly offensive term today but it wasn’t when I was a child.

My friends and I all had a huge sense of identity and community. What my mother lacked in material resources she made up for in time and education, taking us on many protests against things like anti-asylum bills and and encouraging a world view. It was encouraging considering her parents, who I had never met, held racist views.

It was against this backdrop that I got involved in campaigns like Jubilee 2000 and chairing the St Paul’s Afrikan Caribbean Carnival in Bristol, which raised my profile and helped me forge a path into politics.

I was elected as a councillor in 2016 and one of my first aims was to challenge the name of the Colston Hall, which has only just committed to a name change by autumn of this year.

I remember in 2017 when, as a councillor of Jamaican heritage, I was invited to meet the High Commissioner of Jamaica who was visiting Bristol. The meeting took place in the Lord Mayor’s Parlour inside City Hall.

Imagine my shock on arriving to find a portrait of Colston in pride of place on the wall. I subtly pointed it out to a friend who was sat next to me who almost jumped out of her seat!

The opportunity to take this down, along with a portrait of Lord Nugent, came during my term as Lord Mayor, when I refused to maintain the status quo of keeping the portraits there. Instead, I replaced them with a lion and a portrait of Henrietta Lacks, both by local woman artists.

At the time, I couldn’t have foreseen the fate of Edward Colston’s statue three years later, which was pulled down by protestors at the Black Lives Matter march on 7 June and dumped into the docks, like so many of the African people his company threw overboard.

At the time I was co-hosting a five hour online BLM protest for those who could not attend the physical protest. We had a roving reporter, Osei Johnson, at the protest and when he showed me the scene, with the statue being torn down, I stood up and cheered.

We have campaigned for this for years without success, been fobbed off and ignored. It’s been a painful battle to get it removed or indeed get a dedicated museum ‘Abolition Shed’ agreed, which has at times created some tension between Mayor Marvin Rees and me – which is a shame as we have so much in common. We went to the same primary school, our mothers live streets apart and we’re both half-Jamaican.

I don’t know what constraints he has faced in not taking action, but I know that if I was in the driving seat, the statue would have been long gone by now into a museum.

Ultimately, to see it no longer on its plinth filled me with relief.

Educating everyone about this country’s dark past is so important. I remember working at the Bristol City Museum in 1999, when they were showing the A Respectable Trade? Bristol and Transatlantic Slavery exhibition.

I learnt huge amounts but I recall many people of all races crying, with white Bristolians angered and frustrated that they had never been taught the full story.

Some tried to apologise to me personally, which probably sounds odd, but there was some level of reconciliation that happened through that pioneering exhibition, the first major acknowledgment on the city’s history.

That, along with the take-down of the Colston statue by the protestors, demonstrates how liberation must now come at speed.

It’s like with the suffragette movement, where change could not wait for social reform and action to be granted or signed off by administrations, but had to be taken and forced by the collective will of the people. The younger generation is rising up to demand change and they must be listened to.

There are so many systemic issues that need to be addressed, many of which amount to Afriphobia. I am very encouraged to see the young people from my community and their allies take up the baton.

I am helping to build an assembly for African Caribbean heritage youth, so I will do all I can to support them to further usher in the change that’s needed both from within our own community and externally.

I would urge city institutions at home and abroad to listen to us now and remove their statues and symbols that glorify slavery, white supremacy and oppression, and to action the calls for holistic reparations as demanded by campaigns like Stop The Maangamizi: We Charge Ecocide and Genocide.

It is time for those with institutional power to heed these calls if indeed they truly do mean what they say and believe that black lives matter.

And beyond the toppling of statues that are now falling like dominoes, I sincerely hope that this is an opportunity, just like the classic protest slogan shouts, for black and white to unite and fight back. To topple systematic and structural racism, which is underpinned by capitalism in crisis that works for the minority one per cent with the wealth.

We owe this, not just to the memory of all those who have so cruelly and unjustly lost their lives in the past, but also for the generations to come who deserve to live in a fair and equitable society.

MORE: Edward Colston statue will be fished out of harbour and moved into a museum