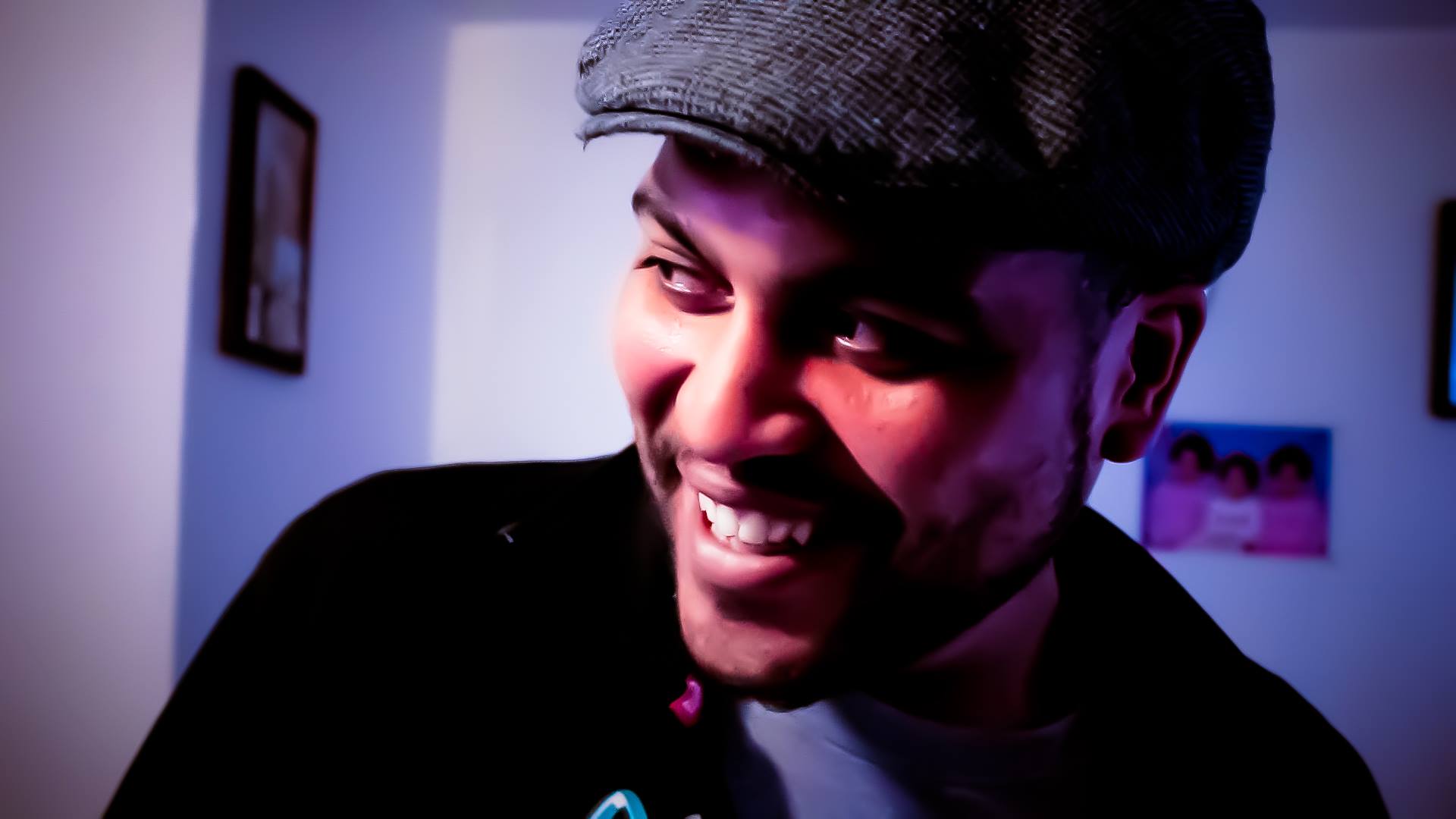 A gentle giant of our city, filmmaker Michael Jenkins is quietly yet firmly shaking up the creative industries and giving Bristol’s Black community a stake in their own stories.

Michael Jenkins and I are on a corner in St. Pauls, where Ashley Road and City Road meet. To our left, Michele Curtis’s bold, blue mural reads ‘Welcome to St. Pauls’ – a fitting place to start our walk.

We pause to admire the next mural on Campbell Street – a location from the opening scene of Jenkins’s latest project, We Are Not The Virus, which formed part of the BBC’s Culture in Quarantine series. It’s a spoken-word film, written, directed and narrated by Jenkins, which begins with the sounds of chains rattling and pages turning, “Optimistic, we came to nurse the pain of the mother country”.

The film is a visual and lyrical ode to Black key workers, who are still on the front lines, simultaneously fighting two viruses – Covid-19 and structural racism.

Jenkins was born in Southmead and his family moved to Bath when he was young. But racism was present there too. “When I was younger and people were telling me to fuck off back to where I came from, I thought they meant Bristol!” He returned to Bristol when he was in his teens to wreak the best kind of havoc on the city.

His backstory proves him to be a creative chameleon, right from the early days. “I got rid of my bed and got my dad to make a wooden desk there so I could put a computer on it and make a little studio,” he tells me. From having his poetry published while still at school, to being part of a hip-hop group in his teens, going viral on an original social media site, Bebo, and selling out venues like Lakota through Red Dread events, Jenkins has moved effortlessly through spaces, crowds and media over the years.

But his heart seems set on filmmaking – in particular, exploring different sides of history, documenting the experiences of the diaspora right now and showing us how the future could be.

Since setting up his production company, 8th Sense Media, in 2012 and co-founding a new venture, Blak Wave Productions, with Dr Mena Fombo in January 2020, Jenkins has built a rich portfolio of culturally relevant films, documentaries, community projects and TV pieces that are testament to the diversity and beauty of the Black experience. ‘I got into this to tell Black stories’ he says.

We pass the Malcolm X Community Centre, one of the first places Jenkins’s early films screened. Since then, his work has gone to international film festivals, won awards, screened on prime-time television and gained traction online, but he remains modest about the considerable mark he’s made on the creative industries in a short time.

‘A sense of ownership is something we’re missing’

In January, Blak Wave gained attention for being the only Black-owned production company in the city, highlighting the devastating lack of diversity in TV and film. In June, Jenkins captured the toppling of Colston’s statue, after covering the story for years and earning Blak Wave’s first commission with Channel 4 called ‘Take Your Knee Off My Neck’. “I just thought, I’ve gotta film this, you know, because this is history,” he says.

Jenkins and Fombo are planning and fundraising for a new Bristol African Caribbean Culture Space (BACCS), a boat they hope will reside in the very spot on the harbourside where Colston’s statue was dumped, sending shockwaves rippling across the world.

For both, the significance of those waters and the lack of Black-owned cultural spaces make it a symbolic spot. Their vision for BACCS is beautifully ambitious, setting the standard for what Black people in this country deserve – a physical celebration of Black excellence and Black people’s contributions to the history and culture of the city.

“History is very nuanced,” says Jenkins. “As Black people we need to have a really good understanding of history and how we can get out of the issues that we’re currently in… and having that real sense of ownership is really something that we’re missing”. What is profound about the story of this fledgling venue is how the co-founders of Blak Wave seek to give Bristol’s Black community a stake in it too.

‘There’s a big disconnect between elders and youngers’

As we’re walking, one thing that is really clear for Jenkins is his care for and proximity to the community. His work serves as an anchor and bridge between the elders and the next generation. “These elders are not gonna be around for long and they’ve got so much to teach us and tell us,” he says. “There’s a big disconnect between the elders and the youngers. So through video, I wanted to do a few things that would address that.”

Take ‘a few’ with a pinch of salt. Over the past eight years, Jenkins has done an immense amount of work – from mentoring young people and documenting elders’ stories to making music videos for upcoming artists, and working with grassroots organisations to create heritage and history projects.

BACCS and Blak Wave feel like gifts to the city and a continuation of his lifelong community work. “You know, when I was working on 8th Sense Media, it just taught me how to listen – everybody’s got a story to tell,” he says.

Like a true filmmaker, Jenkins is focused on the bigger picture. Slowly but surely, the tide is turning.

The problematic past of the Merchant Venturers

How Bristol 24/7 publicised Big Tobacco’s push for respectability, before accepting its money

Doctors had to fit her with a tube so her throat did not close completely. Bristol – Metro …