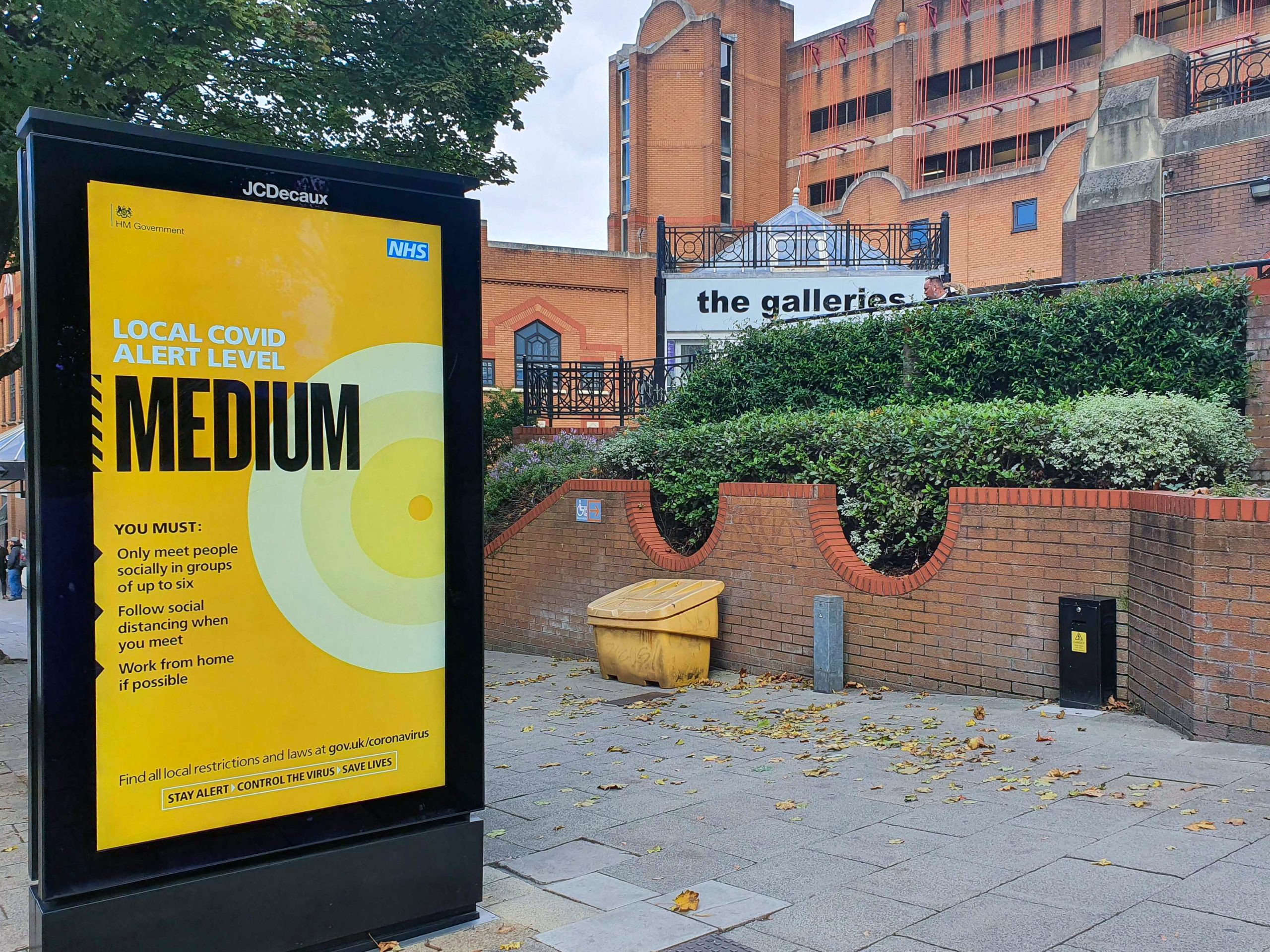 It is “highly likely” that Bristol will enter Tier 2 Covid-19 restrictions very soon, the city’s director of public health said today, as rising numbers of Covid patients are putting the NHS under “extreme pressure”.

Christina Gray, Bristol City Council’s public health boss, told BBC Radio Bristol: “We are in a very, very critical and precarious position and I would anticipate that it’s highly likely that we will be in tier 2 or even possibly higher very soon.”

Bristol is currently in the lowest Tier 1, but this move to stricter restrictions, which would ban household mixing in indoor settings, could come as soon as next week, Gray added.

This comes after the council announced new measures to slow the spread of the virus on Wednesday, described as Tier 1+. In practice, this meant more local testing, Covid marshals to help the public follow the rules and targeted action based on localised data.

There were 1,784 positive cases in Bristol in the seven days up to 26th October, which represents 385 per 100,000 people. This rate is an increase of nearly half compared with the previous week, and more than eight times higher than the start of October. After faring better than lots of other areas, Bristol’s rate is now much higher than the England average of 230. New data will be published later today to give a more up-to-date picture.

Over the last month, schools and universities reopening has contributed to the rise in cases. However, Gray said outbreaks among the student population were easier to contain, and the “rising tide” of infections among working age adults was most concerning because it was harder to pinpoint and manage.

Bristol’s infection rate has risen to higher levels than some areas that have moved into Tier 2. But the government’s decisions on putting local authorities in a certain tier are not made on case numbers alone, but also hospital admissions, which parts of the population are getting infected and how much control the local council has.

Gray said Bristol was “very close” to entering Tier 2, which would ban household mixing indoors. People would still be able to meet groups of no more than six people outdoors, but this is increasingly less appealing as winter approaches.

She said household mixing was at the root of the problem as people are not following social distancing or the rule of six. Transmission is mainly happening in social settings, rather than in controlled ‘covid-secure’ environments, such as schools.

“I think we’ve all got very confused with all the rules and so much information.. everybody’s confused.. So [it’s about] getting back to basics,” she said

“In the South West what has not helped us in a sense was that we got off very lightly in the first wave… It’s very hard then for everyone to get back in that mindset, into that very difficult place.”

However, Gray also spoke about the difficulty of enforcing Tier 2 restrictions in people’s homes. “Unless people are having large parties, we can’t enforce that.”

The number of Covid patients across Bristol’s two hospital trusts, as of 27th October.

On the impact on the local NHS, Gray said: “Over the past week, our hospital system has come under extreme pressure. Partly an increase in people being treated for the severe effects of Covid, but also a range of pressures. Having reduced capacity in order to deal with Covid patients safety, and the winter pressures that we always see at this time of year.”

An internal critical incident is a routine way of managing increased demand and isn’t necessarily as serious as it sounds. Bristol’s NHS trusts are not at the highest level of escalation, which is sometimes the case during winter without Covid-19.

This comes as the number of Covid patients has been “increasing exponentially”, Gray said. As of 27th October there were 43 Covid patients at Southmead Hospital, and 41 at the BRI and Weston General Hospital.

This is still considered relatively low, but represents a sharp increase in the last two weeks. There were 25 patients at Southmead Hospital two weeks ago – which is an increase of 72%. Over the same period, there was almost a sixfold increase at the BRI and Weston General, where there were just 6 patients as of 13th October.

Despite the rising number of patients being admitted to hospital, there are very few who are unwell enough to need a ventilator to help them breathe. As of 27th October, there were seven at the BRI and Weston General and none at Southmead.

There were four deaths in hospital across Bristol’s two NHS trusts in the two weeks up to 29th October, three at NBT and one and UHBW.

An analysis by the Health Service Journal of bed occupancy rates placed NBT and UHBW in the bottom half of NHS hospital trusts, with less than 5% of beds occupied by Covid patients compared with the worst affected trusts, which had rates between up to 30%.

A spokesperson for Bristol, North Somerset and South Gloucestershire CCG, said: “We are currently experiencing a high level of demand in our local hospitals and are working together as a health and care system to reduce pressures as much as possible.

“We are effectively managing the demand across services, and have robust plans in place. The public can do their bit by using the most appropriate service for their needs – whether that’s their local GP practice, minor injuries unit or pharmacy – and avoiding A&E unless absolutely necessary.

“Families of hospital patients can also play their part by supporting their loved ones to return to their home or community as soon as they are ready to leave hospital.”

Advice on what to do

Christina Gray said: “We are all tired of COVID-19 and want things to go back to normal and this has driven some complacency. While people may have been sticking to the rule of 6, this only works if you limit that number and still make sure you stay 2m apart. Meeting multiple groups of 6 people and visiting people’s houses is driving up infection rates.

“It’s really important we all need to look at our own behaviours and ask, are we doing everything we can to prevent the spread of COVID-19?

“The thing we can all do is limit the number of people we see and always stay 2m apart. Wash our hands regularly and wear a mask if we can when needed. The council is working hard with partners to protect you all, please help us by protecting yourself.”