A retired man was stunned to wake up and find more than 100 e-scooters left outside his Bristol house this weekend.

Shane Clarke came home on Friday evening to see a number of e-scooter piled up outside his property.

But by Saturday morning, his family were greeted by even more in the leafy suburban street, after the area was made an official parking spot.

The retired medic said people have for a while been leaving some Voi scooters outside his house at the top of Elm Lane.

He suspects other locations may have been removed from the list of designated parking spots listed on an official app.

Mr Clarke, 60, says it has left his house – where he lives with his wife and son – as the only place to park the devices in the area – and says he counted over 100.

He explained: ‘We lost count at one point so we might have broken the hundred mark.

‘What would be really helpful is if somebody had said “sorry about this, we’ll work on it”.

‘The sub-contractors who came to collect them said “bloody hell we’ve not seen anything like this”.’

His wife, who did not want to be named, said she saw an elderly local resident trip over one of the scooters and that they found a couple of cans and bottles discarded in their front garden.

The scooters have since been cleared by the council from outside the home – which is near a large local park.

Voi scooters can be rented in Bristol, Bath and South Gloucestershire thanks to a trial by the West of England Combined Authority.

It uses an app to geo-tag scooters, which means they will only operate in certain zones, and at limited speeds.

Users have to park them in designated areas or face a fine – and only adults with a driving licence are allowed to hire them.

Mr Clarke stressed that he has no issues with the trial itself, but believes the way that they are stored should be changed.

He explained: ‘From my point of view I have no problem at all with the scooters apart from the obvious – sometimes they’re not ridden responsibly.

‘Talking to other hirers, they’re asking: “where is the alternative nearest parking space?”

‘They’re saying this is the most convenient spot.

‘As they’re supposed to be on road – if we’re going to go ahead with the experiment it would make sense for them to be somewhere with space around them.

‘Or alternatively, give over parking spaces for them… But I guess that would be a whole other debate as to whether residents would be happy with that.’

The Government trial scheme has now been going for more than five months.


While privately-owned scooters are still illegal to use on public roads and pavements, the scheme has been launched to see how well they mix on the region’s roads.

Richard Corbett, the Regional General Manager of Voi UK & Ireland, previously told ITV News West Country: ‘E-scooters are here to really solve the transport challenge that we have in the UK.

‘We need to find an alternative form of transport to riding by car – 50 per cent of nitrogen dioxide in our atmosphere is from road transport.’

The parking issue comes as a rise in crime has been linked to areas trialling the initiative.

MORE : Students caught drink-driving on e-scooters are banned from roads 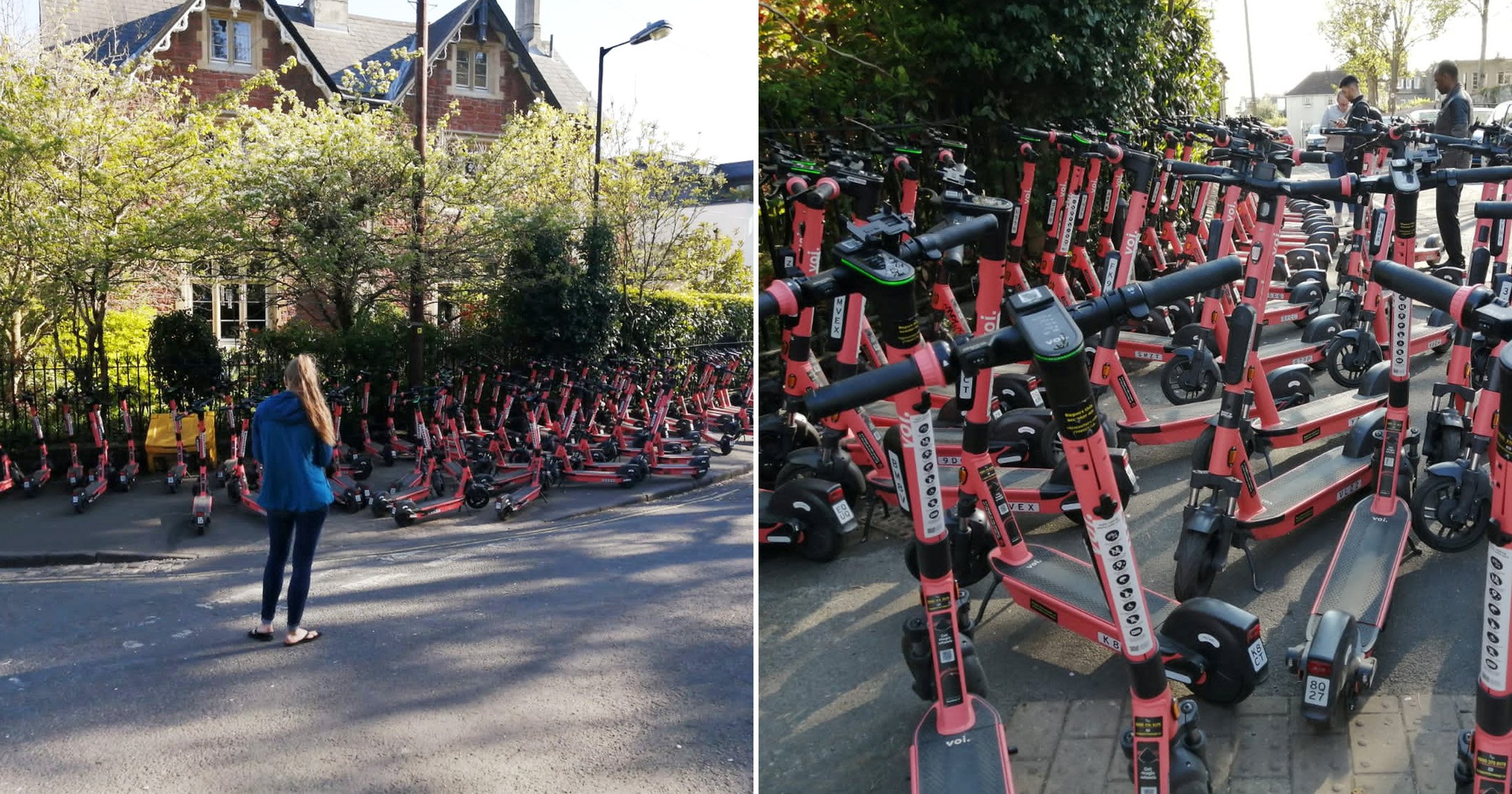