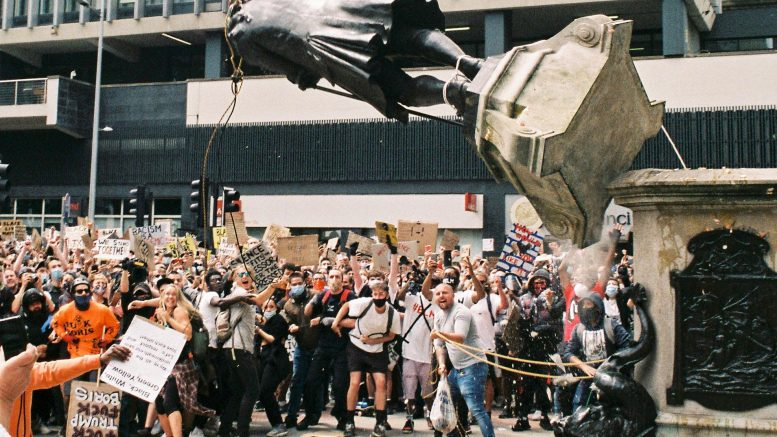 The statue of Edward Colston which was toppled by protesters and rolled into Bristol harbour will be fished out and placed in a museum.

Mayor of Bristol Marvin Rees said today the figure will be retrieved from the water and put on display locally.

He also revealed that historians and local experts will be commissioned to ‘look into the city’s past’.

Mr Rees said: ‘Bristol’s true history will be researched by a new commission so the city can better understand its story.’.

The monument to Colston, a slave trader, was pulled down and dumped in the city’s harbour during Black Lives Matter protests last week.

Mr Rees confirmed that the statue – which had stood in the city centre since 1895 – would be placed in a musuem.

The monument will be placed alongside placards from the recent protests to help educate about the story of slavery and the fight for racial equality.

The news comes on the day that as a new image of the exact moment the statue came down has emerged – from a never-before-seen angle.

Local photographer Harry Pugsley, 23, snapped the monument at a 45 degree angle – seconds before it crashed into the ground.

His picture shows a raucous crowd cheering on the people pulling the statue down with ropes.

Mr Rees said that historians and local experts would be commissioned to research Bristol’s past following the events at the Black Lives Matter protests.

He said: ‘The events over the last few days have really highlighted that as a city we all have very different understandings of our past.

‘The only way we can work together on our future is by learning the truth of our beginnings, embracing the facts, and sharing those stories with others.

‘This is why this commission is so important.

‘Bristol’s journey to become the modern city it is today includes a history of huge disparities of class, race and gender and the struggles for equality.

“Our history includes the growth of education, the struggles of workers for pay and working conditions, and Chartists and suffragettes campaigning for emancipation.

“Our story includes the impacts that wars, protests, slavery and freedom have had on our citizens.

“Crucial to our heritage has been the harbour and the docks, manufacturing and industry, research and innovation, transport, slum clearances, housing, modern gentrification and faith.

“Education of our history has often been flawed.

“More accuracy of our city’s history which is accessible to all will help us understand each other, our differences, our contradictions and our complexities.”

The members of the commission who will spend time delving in Bristol’s history will be announced at a later date, after discussion.

The future of the plinth that the controversial statue formerly stood on will be decided by a democratic consultation, Bristol City Council also confirmed.

The authority said it had received numerous suggestions including tributes to local icons and revolving artworks.

Skinny flats in Bristol appear to be just 2ft wide