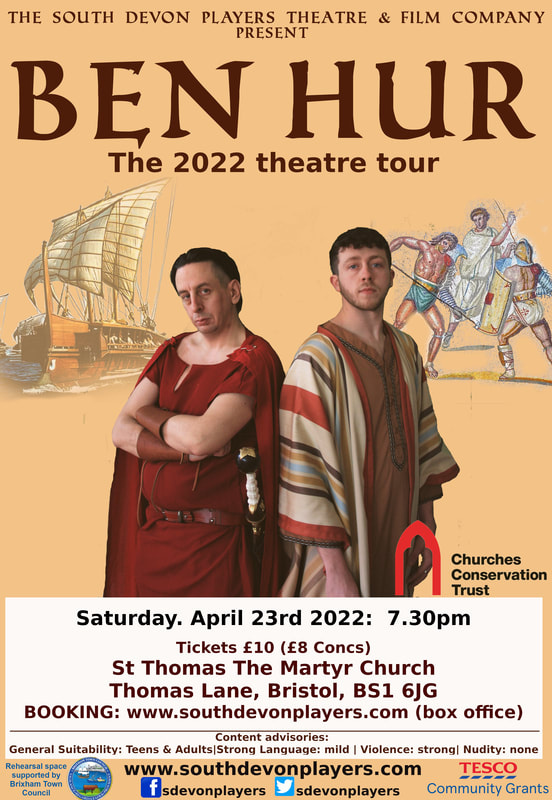 April 23rd 2022 (doors open 7pm, show starts 7.30pm)
at
St Thomas The Martyr Church
Thomas Lane
Bristol
BS1 6JG
BOOK TICKETS AT https://www.southdevonplayers.com/box-office.html
Based on the classic 19th Century novel by Lew Wallace,
Ben Hur is a meticulously crafted stage drama, packed with drama, action, and hope, set across the 1st Century Roman Empire. The story follows a young prince who is accused of attempted murder, sentenced to die as a galley slave, but survives, eventually returning to his homeland, to find that his mother and sister are missing. Despite exacting revenge against the Roman commander who destroyed his family, he finds no peace – until once again his life is changed by two slaves he freed, and a man from Nazareth…
As with all shows from The South Devon Players Theatre & Film Company, this production is suitable for teens and adults.
We produce a free online education pack on our website for students covering aspects of creating the production, a news blog, historical & cultural research, and more. This pack will be available from April 1st via our website.
We also provide full accessibility information for each performance on our website.
Follow the production blog at: https://www.southdevonplayers.com/latest…/category/ben-hur

CONTENT ADVISORIES:
Strobe lighting – none but some lightening effects towards the end.
Strong language – Single use of the word “bastard”.
Sex & nudity – Verbal mention of rape in one scene. No nudity.
Violence – Various scenes primarily the arrest of the Hur family, the attack on the Roman galley, the staging of Gladiatorial games and the Crucifixion.
Use of stage blood – yes in scenes as above.
Loud sound effects – Loud sound effects used at several points within the show.
Characters entering through auditorium – yes at several points within the show