Four people on trial for allegedly toppling the Bristol statue of Edward Colston have been told it is ‘wholly irrelevant’ that he was a slave trader.

The ‘Colston 4’ say they will fight the charges ‘vigorously’, while supporters gathered outside Bristol Crown Court on Monday holding signs that read ‘we all toppled Colston’.

The bronze memorial to the 17th century slave merchant was pulled down during a Black Lives Matter (BLM) protest on June 7 last year, before it was dumped in Bristol Harbour.

Bristol City Council later recovered the statue and put it in a museum.

Dozens of supporters waved banners as the quartet arrived for the start of their eight-day trial today.

Among the signs being held aloft outside the court were messages including ‘we’re glad not to see Colston on a pedestal anymore’ and ‘solidarity with the Colston statue topplers.’

Charges allege that the group, together with ‘others unknown’, damaged the Colston statue and plinth of a value unknown without lawful excuse.

Graham, Skuse and Willoughby, all from Bristol and Ponsford, from Bishopstoke, Hampshire – were all on unconditional bail.

Skuse is accused of orchestrating it being rolled towards the harbour, while the other three allegedly pulled it down.

Prosecutor William Hughes QC said that around 10,000 people had been at the BLM march, and police described it as ‘friendly, engaging and very much a community event with an emphasis on coming together to make a change’.

He said a small group peeled off the march and congregated around the statue after the majority of the crowd had passed by.

‘It was pulled down by members of the small group who include the first three defendants’, Mr Hughes said.

‘After it was toppled it was daubed with paint, spat on and struck with implements, and thereafterwards it was rolled through the city centre and thrown in the harbour at Pero’s Bridge.

‘The felled statue was rolled a considerable distance – approximately 520 metres – where it was pushed into the harbour.’

He said the four defendants had been part of a “criminal enterprise with others” to topple the statue.

‘It was not part of the peaceful Black Lives Matter march, it was unlawful activity criminal activity to which these four defendants were each joined,’ Mr Hughes said.


He told jurors: ‘The prosecution accept that Edward Colston was and remains a divisive figure among the community of Bristol and beyond.

‘It is common ground that he was a slaver and much of his fortune was built on the slave trade, and in later life he was something of a philanthropist.

Mr Hughes said it is the prosecution’s case that who Colston was is ‘wholly irrelevant’ to the issues jurors will have to decide in the case.

He continued: ‘But for the defence this position is quite the contrary, the position is that it is relevant and this is something you will have to decide in due course.’

The jury heard that an estimated £3,750 of damage was done to the statue – including losing its staff and a coat tail – but the council has decided not to restore it.

A further £350 of damage was done to the railings of Pero’s Bridge.

The toppling made headlines around the world and took place during a BLM rally in Bristol city centre following the US murder of George Floyd.

The jury was shown footage of Graham, Ponsford and Willoughby allegedly passing ropes to one another to place around the statue’s neck.

Referring to the ropes, Mr Hughes said: ‘You may think that is suggestive of pre-planning the statue toppling.’

There were cheers from the packed public gallery when the moment the statue was felled was played.

The jurors were asked to declare if they were present when the statue was torn down, when it was rolled towards and dropped in the harbour or during attempts to retrieve it from the water.

Judge Peter Blair QC, the Recorder of Bristol, is presiding over proceedings. 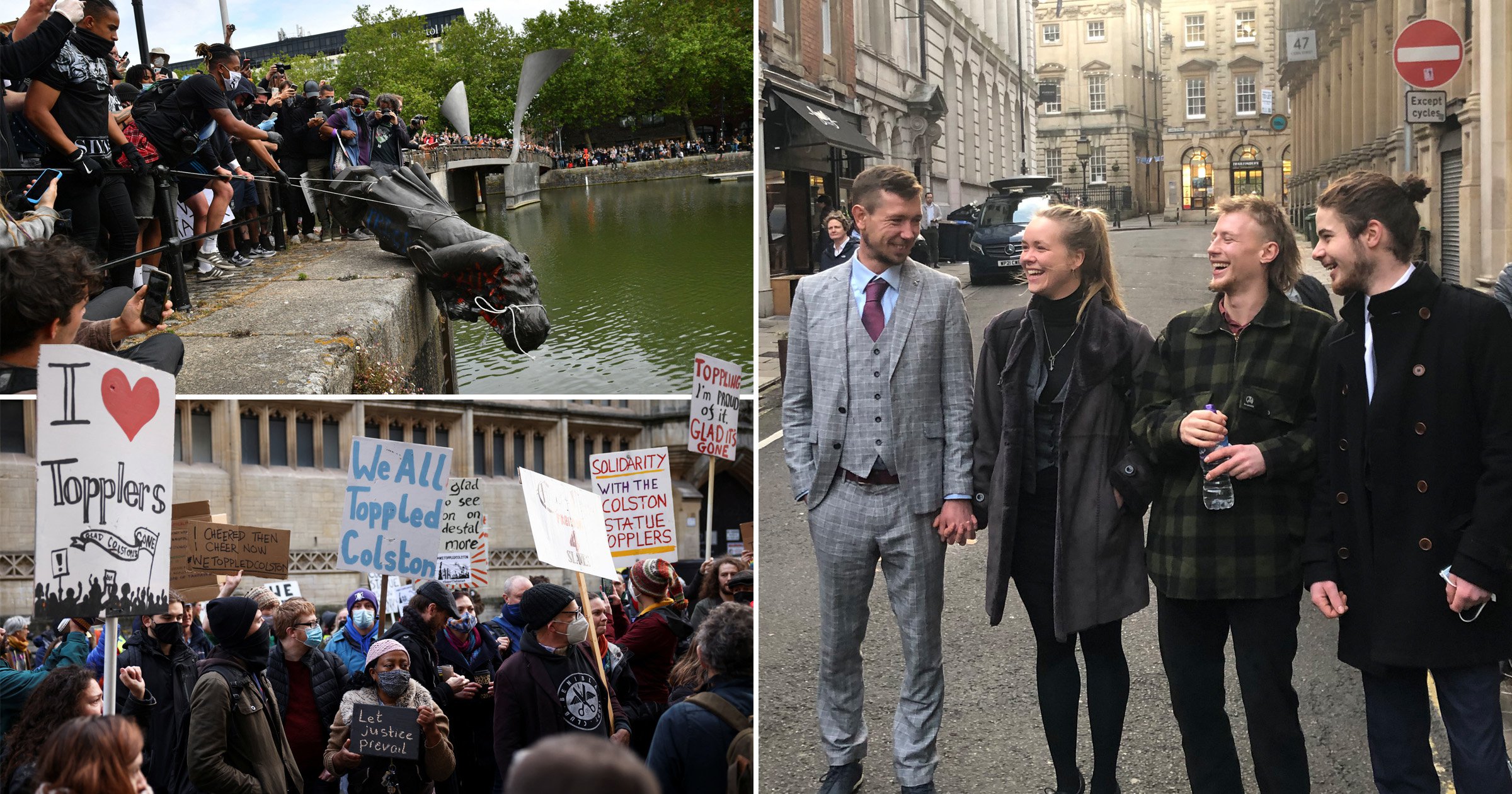