A ‘feisty’ 12-year-old has been praised for her unbreakable spirit as she battles a rare and debilitating genetic disease.

Abby Pope was born with a condition called Autosomal Recessive Polycystic Kidney Disease (ARPKD), which led to her developing serious health problems including an enlarged liver, spleen and kidneys.

She spent almost two weeks in intensive care after undergoing a lifesaving liver and kidney transplant in 2014, aged five.

But Abby has since been diagnosed with extensive bone disease, which doctors believe is connected to gruelling treatment she has endured to manage her ARPKD.

She faces months of surgery to treat deformities – most urgently in her knees but also in her ankles and wrists and potentially hips and spine – with consultants describing her case as the most severe they have witnessed in decades.

Now her family have launched a campaign to raise £30,000 to adapt their home in a bid to transform Abby’s life and give her the care and independence she deserves.

Abby, from Bristol, requires a feeding tube and will be reliant on a wheelchair for the foreseeable future. She may also need another transplant.

There is currently no cure for ARPKD, which affects one in 20,000 babies.

But despite her ongoing ordeal, she is always positive and smiling, mum Carina Pope, 40, told Metro.co.uk.

‘Obviously we have low points, there have been times when Abby has been so poorly, we have prepared for the worst.

‘But for her it has always been just the norm. She is quite feisty and she just gets on with it.’

Carina and husband Andy’s first daughter, Elise, was diagnosed with ARPKD when she was 34 weeks pregnant in 2002.

But Carina learned Abby would have the condition when she was 27 weeks pregnant in 2008. Her twin brother, Aron, does not have ARPKD.

‘The rollercoaster started from there,’ Carina, who also has a younger daughter, Laci, four, told Metro.co.uk.

‘She has about six or seven surgeries up and coming – but it is not just the surgery, it is the recovery and rehabilitation, it is an ongoing process.

‘It is complex surgery so this is going on for years and years.

‘The next few years will be tough, unfair and physically and emotionally draining but it is amazing how she has coped through it all.

‘All we are trying to do as parents is make Abby as comfortable and as happy as we can, but it has not been easy.’

‘She is going to be 13 in September, this will give her an element of independence.

‘If she has friends round they can chill out and everything is accessible.

‘We are just trying to make everything a bit more normal for Abby, to give her her own space and the ability to go through the house and get to her room and out in the garden.

‘What 13-year-old wants her dad carrying her up to bed?’

Abby is also excited about the arrival of a specially adapted off-road wheelchair that will help her to visit the beach and woodlands.

Carina, who home-schools Abby, Aron, and Laci and also runs a home decluttering business, described the support they have received so far as ‘mind-blowing’.

In addition to the crowdfunding campaign, dad Andy, 45, is doing a sponsored cycle ride while Carina is set to do a 10-mile walk.

Andy also set up a business making bracelets during the lockdown to raise funds, which Abby has been involved in ‘right from the start’.

‘She has been amazing, she has absolutely 100% been an inspiration,’ Carina added.

‘We are also so proud of our boys who have gone through all of this by her side.

‘There are lots of risks involved in the bone surgery and no promises, we completely get that.

‘All we can do is take it day by day, there is no way you can plan for the future with a child with a life-limiting condition.

‘But life is short, we have to grab it and enjoy it.

‘As long as Abby is smiling, as long as she isn’t complaining, I don’t want to complain either.’

For more information and to support the campaign, click here. 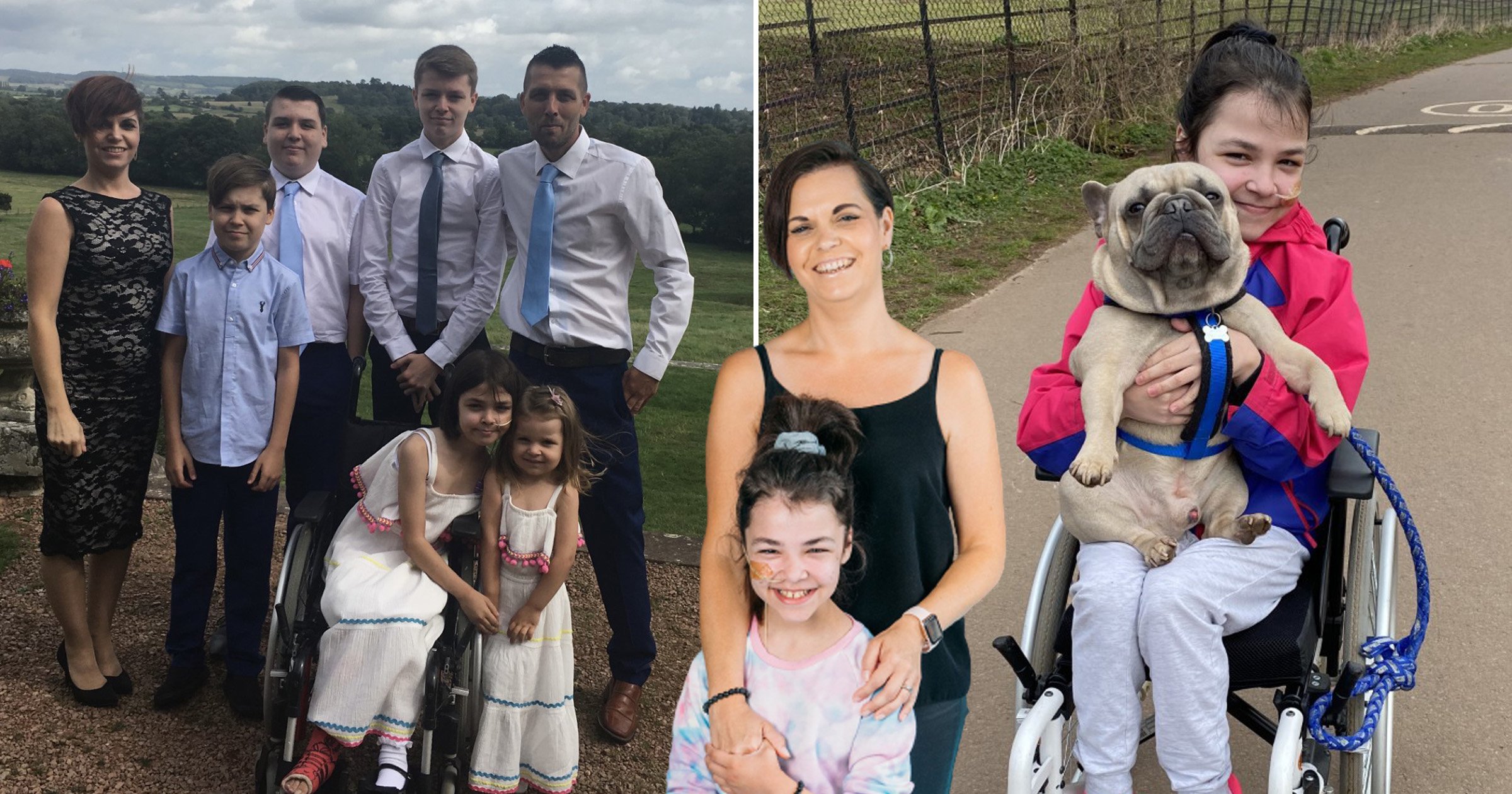