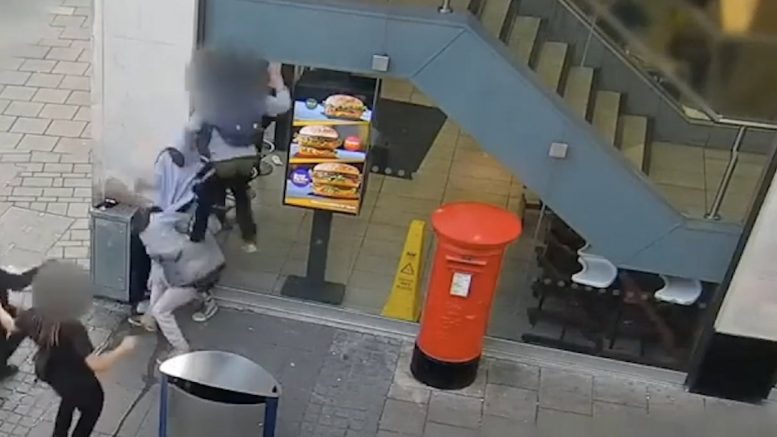 A thug who fly-kicked a homeless man in an unprovoked attack has been jailed for four and a half years.

Abdifathi Ibrahim, 20, had been with three friends when one of them grabbed their victim outside a McDonald’s in Horsefair, Bristol city centre, on March 4 2019.

In CCTV footage of the attack, Ibrahim can be seen running over to the pair, jumping on a bin and launching himself at the victim, with his foot landing on his back.

The man then falls to the floor as Ibrahim continues to kick him, appearing to aim for his head several times as his two other accomplices join in.

Eventually the attack ends after around 15 seconds, with a woman approaching the group.

The victim is then left on the ground clutching his stomach as his attackers walk calmly away.

Ibrahim was arrested in August last year, after a witness called the police.

He then pleaded guilty to the assault and was jailed on Thursday at Bristol Crown Court.

Prosecutor James Haskell told the court it was pure luck that the victim had not been seriously hurt during the incident.

He told the court: ‘Mr Ibrahim and his friends then walked off almost celebrating what had just taken place.’

The other man and two youths who all appear in the CCTV have been ‘dealt with separately’, The Sun reports.

Ibrahim also admitted to assault occasioning actual bodily harm, which occurred between March 20 and 24 last year, and a fight on April 10.

Hunt for mum and son, 2, missing after Ryanair flight to Spain