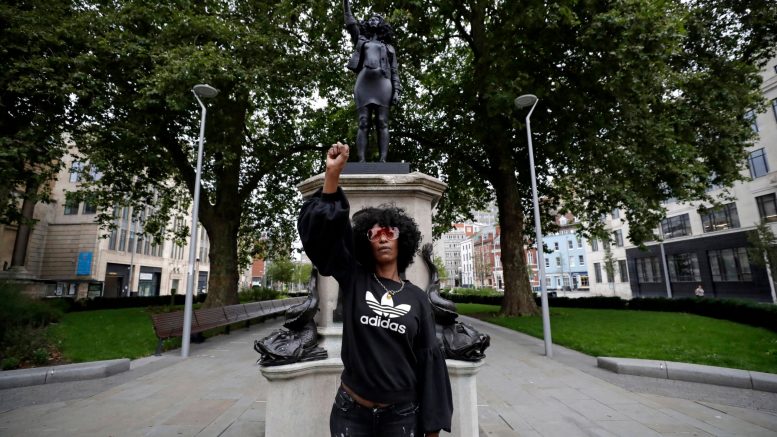 A statue of a Black Lives Matter protester erected to replace that of Edward Colston “will have to be removed”, Bristol‘s mayor has said.

London artist Marc Quinn created the life-size black resin and steel sculpture of activist Jen Reid after seeing a photo of her standing on the empty plinth following the toppling of the 18th Century slave trader.

A sign reading “Black Lives Still Matter” was placed at its base.

Following its installation, mayor Marvin Rees tweeted: “I understand people want expression, but the statue has been put up without permission.

“Anything put on the plinth outside of the process we’ve put in place will have to be removed.

“The people of Bristol will decide its future.”


Mr Rees had previously said that any decision on how the plinth should be used would be decided democratically through consultation.

In a statement issued after the sculpture was erected, he said change needs to happen at a pace that “brings people with us”.

“The sculpture that has been installed today was the work and decision of a London-based artist,” Mr Rees said. “It was not requested and permission was not given for it to be installed.”

Mr Rees referenced a commission set up by the council to tell a “fuller history” of the city, including the part played by black people, women, the working class, trade unions and children.

He said this would put the city in a better position to understand “who we wish to honour”.

“As the commission shares this information, the city will decide on city memorials and the future of the plinth,” Mr Rees said.

Who is Jen Reid? The BLM activist whose statue has replaced Colston’s


After the sculpture was installed on the plinth, Mrs Reid stood in front of it with her fist in the air.

She recalled climbing on to it after the Colston statue was pulled down, and spontaneously raising her arm in a Black Power salute.

“It was like an electrical charge of power was running through me,” the stylist said.

“My immediate thoughts were for the enslaved people who died at the hands of Colston and to give them power.

“Creating this sculpture is so important as it helps keep the journey towards racial justice and equity moving, because black lives matter every day.

“This sculpture is about making a stand for my mother, for my daughter, for black people like me. It’s about black children seeing it up there.

“It’s something to feel proud of, to have a sense of belonging, because we actually do belong here and we’re not going anywhere.”

Mrs Reid described the Colston statue being thrown into the river as “a truly historical moment”.

Mr Quinn said it was not put on the plinth as a “permanent solution”, adding that it may only last days or weeks before taken down.

“We want to keep highlighting the unacceptable problem of institutionalised and systemic racism that everyone has a duty to face up to,” he said.

If the statue is sold, all profits will be donated to Cargo Classroom and the Black Curriculum – two charities chosen by Mrs Reid, Mr Quinn said.