Police investigating a swastika sprayed onto a car on a Jewish holy day have said they do not believe anyone was being ‘deliberately targeted on the basis of their race or religion’.

The graffiti appeared on Monday, the second date of this year’s Yom Kippur observance, in Waters Road, Bristol.

The hate symbol sprayed in neon yellow paint has prompted international condemnation, with Israeli President describing it as a ‘shocking sight of rising antisemitism’.

He tweeted on Tuesday: ‘Words of condemnation are not enough. We need Holocaust education and remembrance so governments and societies everywhere actively challenge this threat to Jews.’

A Jewish local with Holocaust survivors in his family, Nick Helfenbein, described the sight as sickening.

He said: ‘We woke up to our neighbour’s car tagged with a giant neon Swastika. It’s Yom Kippur, and this makes me sick both as a Jew and as a human.

‘This is the holiest day of the Jewish year, and to have a swastika suddenly appear right across the street from our flat, in Bristol of all places, is absolutely harrowing. This causes deep upset and anxiety.’

Police have removed the symbol from public view and are appealing for information that could lead them to the culprit.

Andy Bennett, Avon and Somerset Police’s lead on hate crime, said: ‘We take all reports of this nature very seriously and will not tolerate such unacceptable actions. There is no place for offensive acts like this in any of our communities.

‘Following this incident we approached the Jewish Community Safety Trust who are satisfied that we’re dealing with this in a correct and proper way.

‘However, although our investigation into this incident is at an early stage, we’d like to reassure people that we do not believe the owner of the vehicle or anyone else was deliberately targeted on the basis of their race or religion.

‘This follows conversations with people in the area and the owner of the car.

Anyone with information can call 101 and give the call-handler reference number 5220221077.

Religious leaders spoke out this week after Jewish people were targeted in a number of European countries over Yom Kippur.

Get your need-to-know latest news, feel-good stories, analysis and more 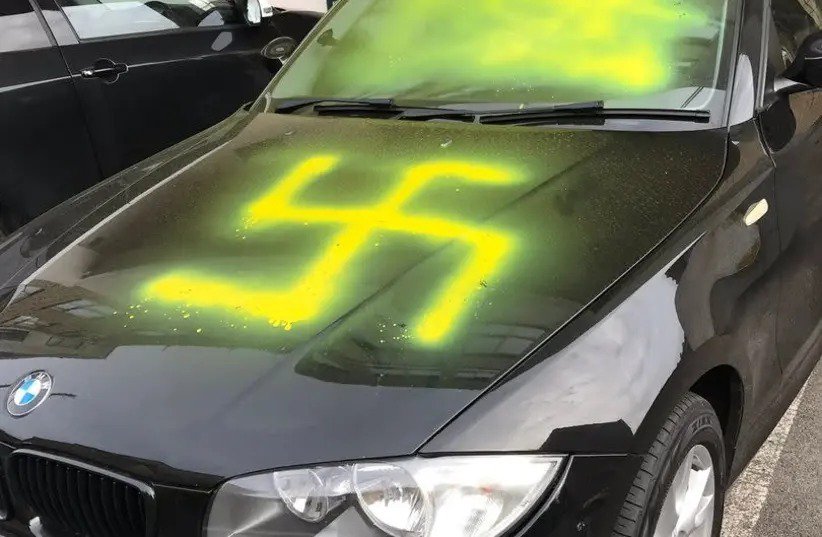