Not even Pride was safe from Covid-cancellation, but luckily many events are set to be re-arranged.

And with some towns kicking off the celebrations as early as July (fingers crossed), it’s time to get planning.

From full-blown carnivals to small-scale celebrations, here’s how you can celebrate LGBT+ rights this year.

After being rescheduled from May, Birmingham’s Pride celebrations return to
Smithfield with a 12-acre, 20,000-person ticketed bash.

It features a dance arena, a funfair, a cabaret marquee and a main stage headlined by Cheryl, Eve, Katy B and other luminaries including Drag Race’s Baga Chipz (tickets from £45 per day, free for under 12s and over 65s).

Elsewhere, the carnival parade’s route has yet to be announced but last year’s was due to start in Victoria Square and wind through the centre to the Hippodrome.

While you’re there: Stroll around the historic Jewellery Quarter, the place to go
for bars, clubs and art galleries.

Check in: The perfectly placed Malmaison in the city centre has rooms from £77pn.

Another safe(r) bet, is Bristol, which celebrates this year with a Pride fortnight packed with different events rather than one big (cancellable) shebang.

Head down for theatre and comedy nights, a dog show, a film festival and a drag cabaret night resplendent with queens from Drag Race UK (tickets £64).

The main event, in so much as there is one, is Pride Day in Castle Park on Saturday, July 10, where you’ll find a food market, and family and youth areas, as well as roaming live performances.

It’s free but you’re encouraged to buy a supporter’s wristband.

More details will be released shortly on the website.

While you’re there: Take a street art tour in the hometown of Banksy and learn about the history of Bristol’s graffiti (from £7.50).

Check in: Bed down in the chic Berkeley Square Hotel; doubles from £93pn.

The capital’s Pride is still thin on detail but we do know the parade route will be slightly different this year.

Regardless, the fun tends to follow the same format each year: a rather raucous Tube journey followed by a quick gander at the march (cue annual discussion about whether it’s all too corporate).

Then it’s down to Trafalgar Square for speeches by Sadiq Khan et al, before heading to Soho to stand around necking canned G&Ts.

Do some research and book tickets for after-parties in advance.

While you’re there: Sink hair of the dog at the drag brunch at Gigi’s Hoxton, £40pp.

Check in: Westminster Curio has rooms from £132pn.

Manchester’s Pride, like its scene, is inclusive and huge: a four-day bank holiday Garden of Freedom-themed party, no less.

Highlights include MCR Pride Live festival on Saturday and Sunday, where you can catch the likes of Eve, Gabrielle and poet Mykki Blanco. Then there’s a singalong cinema, a silent disco and a street party in the Gay Village (from £15 per day), as well as, of course, Saturday’s parade.

Pre-game at Freight Island, an outdoor food market and bar – perfect for sinking cocktails and making eyes at randoms.

While you’re there: Explore the creative Northern Quarter, stuffed with cool independent bars, boutiques and cafés.

Check in: Stay in style at Hotel Gotham, located in a beautiful Art Deco building, a former bank designed by Edwin Lutyens. Rooms from £149pn.

Southampton’s Pride started out as a vigil for victims of the Pulse shooting in 2016 and has grown into one of the south coast’s best-attended (and free) Pride events, bringing in almost 18,000 people each year.

The day kicks off with a parade winding its way round the city centre and its parks before ending up back where it all began, at the Pride Village in Guildhall Square.

If you’re keen to get involved, volunteer applications for placard holders and flag bearers are still open. If not, mooch around the 30 or so stalls and see acts on the main stage.

While you’re there: Pretend you’re in Dubrovnik with a walk around the medieval city walls or take the Titanic Trail (the doomed ship set sail from here in April 1912).

Check in: The hip Moxy hotel has rooms from £81pn.

There’s no parade this year but there are plenty of free alfresco queer offerings, including an art trail, a sports day and a host of performances and talks at Cliftonville’s Oval Band Stand.

Older members of the community should make a beeline for the teatime social,
while there’s also the chance to enter Margate Pride’s very first beauty pageant,
Mx Margate.

While you’re there: Get a modern art fix at Turner Contemporary (free) or embrace the kitsch of vintage theme park Dreamland.

Check in: Wake up with a view of the sea at the Sands Hotel – rooms from £150pn.

MORE : LGBT station Virgin Radio Pride UK launched with Tia Kofi among presenters: ‘Made by queer people for queer people and beyond’

MORE : The Hot List: Fly the flag for Pride Month with rainbow print everything

MORE : Hundreds line streets to support bakery that was boycotted for Pride cookies

Get need-to-know travel news, inspiration and advice from Metro every week. 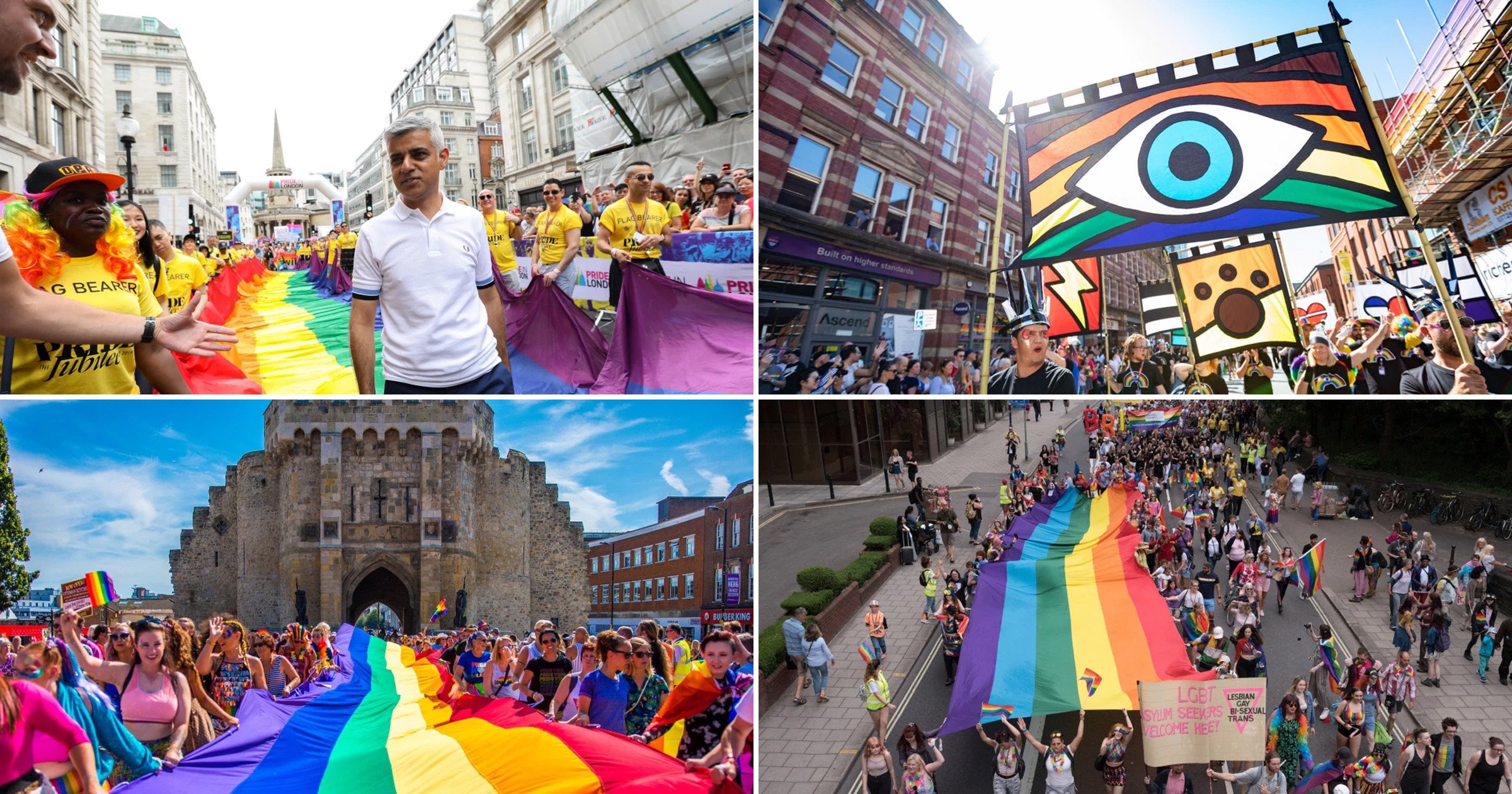