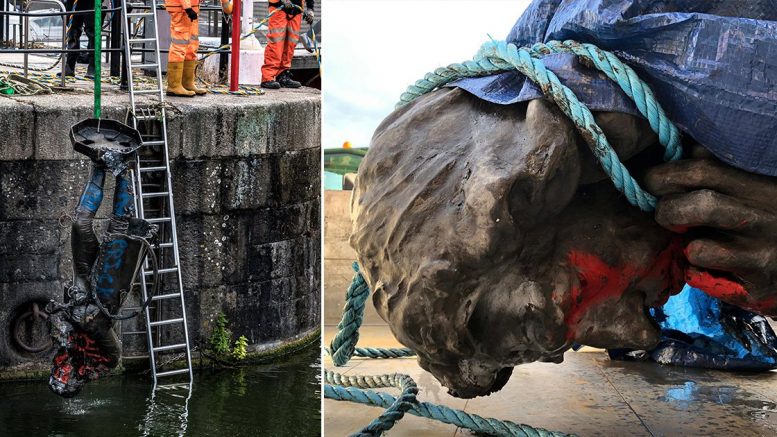 Bristol officials have fished out of its city harbour a statue of slave trader Edward Colston that was thrown into the water during Black Lives Matter protests.

The City Council posted a video clip on Twitter of the controversial bronze monument being hauled out of the water on Thursday morning.

It tweeted: ‘Early this morning we retrieved the statue of Colston from Bristol Harbour. It is being taken to a secure location before later forming part of our museums collection.’

Bristol’s mayor Marvin Rees had previously confirmed that the statue would be put on display in a local museum alongside placards from the demonstration. He also revealed that historians and local experts will be commissioned to ‘look into the city’s past’.

Mr Rees said a decision on how to fill the now empty plinth in College Green will be decided through democratic consultation.

He said: ‘Bristol’s true history will be researched by a new commission so the city can better understand its story.’

The bronze memorial to the 17th Century figure stood in the city centre since 1895 and had been the subject of numerous petitions to have it torn down.

It was pulled down with ropes on Sunday, dragged through the streets and dumped in the harbour during protests. A group of white men were later pictured trying to pull it out of the water.

The BLM demonstrations were sparked following the killing of George Floyd in Minneapolis, who died after white police officer Derek Chauvin pinned him down pressing his knee into his neck for almost nine minutes.

The retrieval of Bristol’s statue comes amid renewed calls for monuments of colonialists and slave owners to be removed across the UK – a topic which has divided opinion and sparked debate.

Shadow Foreign Secretary Lisa Nandy said its forced removal was the result of years of frustration with the democratic process.

Speaking on ITV’s Peston on Wednesday, the Labour MP said people decided to take action over the memorial because they felt their voices on racial issues were not being heard.

She said: ‘Why was that statue removed in the way that it was removed?

‘Because for 20 years, protesters and campaigners had used every democratic lever at their disposal, petitions, meetings, protests, trying to get elected politicians to act, and they couldn’t reach a consensus and they couldn’t get anything done.

‘Now this is reflective of what has happened to people of colour in this country and across the world for a very long time. We’ve had seven reviews into racial discrimination in this country in the last three years alone, and very few of those recommendations have been acted on.

‘That is why people are so frustrated, and that’s the question we should be asking ourselves, is why is it so difficult for so many people to actually be heard and to pull the democratic leaders to get the democratic change that they need?’

It comes after a bronze statue of 18th century slave trader Robert Milligan was pulled down from its spot on West India Quay, outside the Museum of London Docklands on Tuesday evening.

The Museum of London said the statue had stood ‘uncomfortably’ outside for a long time and that it was ‘part of the ongoing problematic regime of white-washing history, which disregards the pain of those who are still wrestling with the remnants of the crimes Milligan committed against humanity’.

Protesters have also been calling for Oxford’s statue of imperialist Cecil John Rhodes to be pulled down.

Topple the Racists has created an interactive map identifying all the monuments they hope to remove across the UK.

Mayor of London Sadiq Khan announced this week that he has launched a commission to review of all of London’s statues and street names, saying any with links to slavery ‘should be taken down’.

Dozens of adult Lego fans struck down with ‘norovirus’ at event