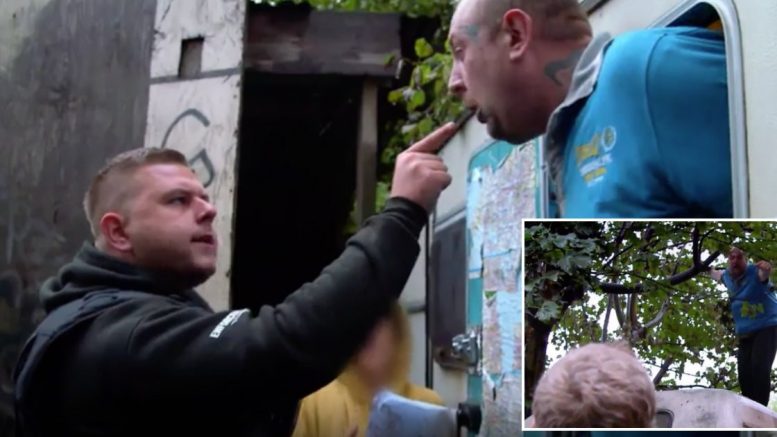 This is the moment a ‘class war-waging squatter stood on the roof of his caravan and shouted at an 81-year-old landowner, refusing to budge during a 12-hour stand-off.

The heavily tattooed man refused to leave Army veteran Jonathan Price’s land as he pursued a vociferous battle against High Court bailiffs in front of a large crowd.

The trespasser invited the enforcement officers to fight him while a friend lay down in front of a cherry picker as it was wheeled into place in Stokes Croft, Bristol.

Mr Price had tried unsuccessfully to persuade the man to move from land he had bought with the intention of selling on to fund a retirement home overseas.

Four caravans had originally occupied the site, but after efforts by the former Army officer to get the occupants out, including offering to pay for moving costs, only one was left remaining.

Mr Price is told by one of the squatters: ‘We will resist…Generations of your people have oppressed the working class people of the country and made them suffer.

‘They will have to take accountability for their actions, for their greed and their personal profit. There is no war but class war.’

The enforcement agents then visit the site backed by a court order, but the remaining squatter resists the attempt to allow Mr Price to reclaim his land.

Poking his head out of his caravan window, the unnamed man claims he has the right to be there and shouts ‘come and fight us then’ as one of the bailiffs asks him to leave.

He then continues his expletive-laden protests on the roof of his battered white caravan as a crowd gathers, shouting at Mr Price: ‘This ain’t his land.’

Speaking after the incident, the landowner says: ‘They are fighting class war, for workers’ rights. It’s nonsense in this day and age.’

Police arrive as the sheriffs call for a mechanical lift, but the squatter’s friends lie down in front of the cherry picker as it is being wheeled into place.

The flashpoint is one of those featured in the new show which follows tensions in a housing market said to be at ‘breaking point’.

The man finally climbs down a ladder into the arms of a woman waiting on the ground as he gives up his resistance peacefully after night falls.

However, Mr Price is left with a £15,000 bill as a result of the process, which features in the first episode of the ten-part series.

Mr Sharpe, of The Landlord Group, says: ‘The only loser here is Jonathan because you have seen how much manpower there is here.’

The retiree is praised by the lawyer for keeping his composure.

Mr Sharpe adds: ‘He is delighted, he was subjected to ridicule, threats and aggression by these people. He kept his composure, kept his calm and he walked away from this with his head absolutely held high and his dignity absolutely intact.’

The series was filmed before the pandemic and the resulting ban on bailiff evictions, which has been extended to the end of next month.

The measure has been taken to protect private renters during the health crisis but tenants’ groups say it is not enough to stop an evictions crisis. 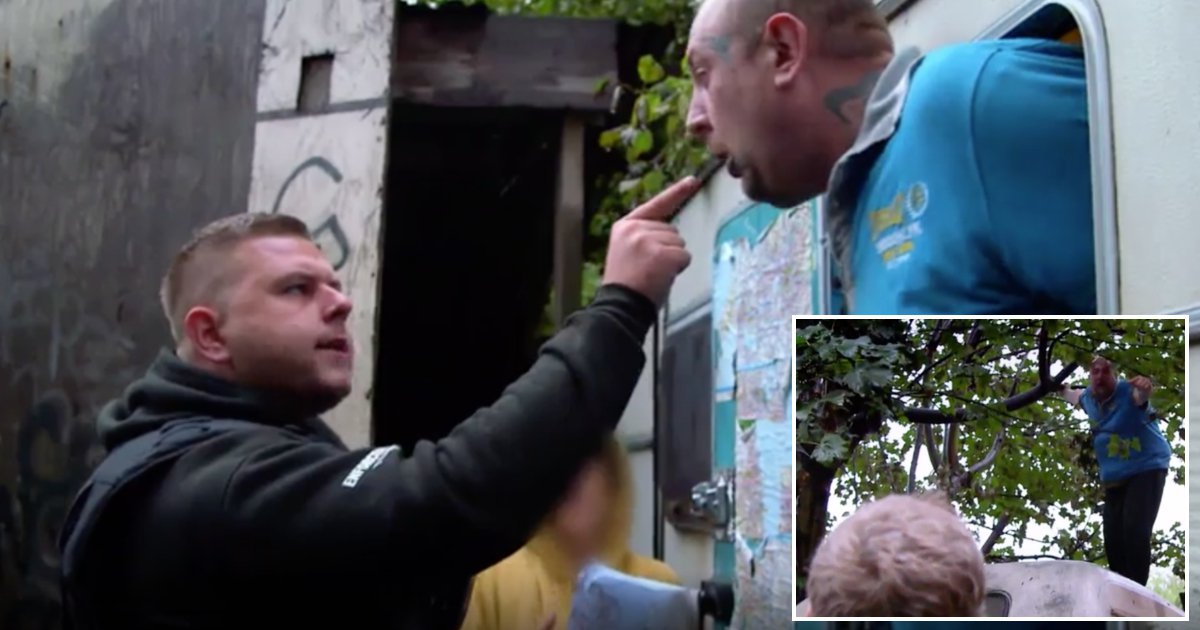