Where to Buy and Rent in Bristol

Bristol has always felt like a city in the ascendant, but never more than now. With European Green Capital status, it outperforms other cities in terms of economy and quality of life – it’s the wealthiest, happiest city in Britain, according to a survey by MoneySuperMarket. And there is a sense that it has more to give.
The Bristol Arena, a £90 million indoor venue, is due for completion in 2017. The following year, a new high-speed rail service will knock 22 minutes off the journey to Paddington. There are two thriving universities, an airport, high employment and the housing market is booming. It tops the list of destinations for relocating Londoners. So where should the newcomer look for a home?

Clifton
With its listed Georgian terraces, Regency crescents and garden squares, Clifton is the default option for many would-be movers. It’s a large area, running from the edge of Avon Gorge across Durdham Downs and down Whiteladies Road to meet the so-called Triangle, where Bristol University’s Gothic Wills Memorial Tower rubs shoulders with the municipal Museum and Art Gallery. Head to Clifton Village for cafés and boutique shops, Clifton College prep school and the grandest terraces: Royal York Crescent looks down on the city from a curve of wrought-iron balconies. Most properties are leasehold flats. A two-bedroom Crescent apartment recently sold for £330,000, but there are a few houses around.

Leigh Woods
Hop across the Clifton Suspension Bridge to Leigh Woods, a corner of suburbia set among woodland, botanical gardens and the council-run Ashton Court Estate.
Aside from the busy A369, it couldn’t be greener. Indeed, there was nothing here but woodland before the bridge was built, but Brunel’s 1860s marvel launched a village enclave built by some of the city’s most prominent industrialists, including the Wills tobacco family. Bracken Hill house (pictured right), a Leigh Woods mansion built by the grandson of Wills’s founder in 1886, is for sale through Hydes with an acre of its own botanic garden and a guide price of £1.75 million-£2 million. Another, even larger Wills family mansion, Burwalls (below), is soon to be divided into five properties – perhaps the largest, most expensive apartments in Bristol – priced from £1.05 million through Knight Frank. 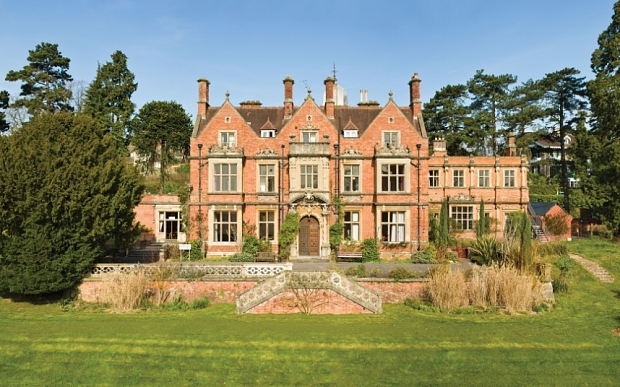 Redland and Cotham
According to Knight Frank, Redland was last year’s top Bristol hotspot, with price growth outperforming the wider market at 8.5 per cent. And it’s easy to see why: a handy little station (on the Severn Beach branch line from Temple Meads to Avonmouth), the best of the city’s state schools (Redland Green and Cotham), green space, allotments and large Victorian houses for under a million.
Great location, too: head downhill for the city centre, or uphill to the Downs. To the south, Redland runs into Cotham (it’s hard to tell the difference between the two) and to the north into Westbury Park (for the city’s largest Waitrose). Two-bedroom apartments in the area sell for around £300,000.

Hotwells and harbourside
The once-derelict Floating Harbour is now the salty heart of the city, with a combination of history, offices, narrowboats and new waterfront apartments. Prime addresses are the period terraces of bright-painted Clifton Wood houses that back on to Hotwells Road offering views of the SS Great Britain. Heading south towards the centre, the 10-year-old harbourside development has been cheered up by the addition of Purifier House and Invicta, two blocks of industrial-luxe waterside apartments built around an 1820s, Grade-II listed gas works.
For Wapping Wharf, the newest waterside development, hop on a foot ferry to Spike Island, a spit of former docklands between the Floating Harbour and the Cut. The development will offer more than 600 “wharf-style” homes, with two-bedroom apartments selling off-plan at £315,000.

Stoke Bishop and Sneyd Park
On the north side of Durdham Down, Stoke Bishop, one of Bristol’s smartest suburbs, is hotspot number two (with an annual growth of 8.1 per cent). Encapsulating exclusive Sneyd Park, the area heads north from Clifton Down, along the Gorge’s city side towards Sea Mills. Many of the houses are one-offs, or vintage micro developments built on large plots. This makes for a pleasing mix of styles, ranging from Victorian, Edwardian, Arts and Crafts, high-end Thirties, post-war bungalows and a smattering of glassy modern.

Bishopston and St Andrews
From Cotham, head downhill to Bishopston and St Andrews, two residential suburbs sitting either side of Gloucester Road – a long stretch of independent shops, bars and cafés that runs from the city centre up to Horfield and, eventually, Gloucestershire. The area combines lively street life with a family-friendly community, and terraces of solid Victorian houses, some of which fall into the Redland Green or Cotham School catchments. The average house price is about £390,00, but you can pay upwards of £550,000 for larger, more decorative houses on prime streets, such as Effingham Road, overlooking St Andrews Park.

Southville
Stuart Oliver, of Andrews Estate Agent, describes it as “Bristol’s Notting Hill” – an area that went unnoticed for years and is now booming, with some houses selling overnight, at 5-10 per cent above the asking prices. The area built up around Wills’s Imperial tobacco factory in the late 19th century and declined when the factory closed. Regeneration began when the Tobacco Factory re-emerged as a theatre and arts hub in the late Nineties, followed by an influx of café-bars and rising house prices. Proximity to the harbour is part of Southville’s big draw – take one of the footbridges that cross the Cut – but bullish price increases are partly driven by lack of supply. Typically, three or four-bedroom Victorian houses sell for £350,000-£450,000. Nearby, Ashton Gate is commanding similar prices as demand moves farther south.

Redcliffe and the city centre
The area that wraps around the city’s core, taking in the east end of the Floating Harbour and St Mary Redcliffe church, is crowded with emerging developments and the market is brisk.
According to George Cardale, head of Savills’s residential development in Bristol, one new waterfront scheme, Bridge Quay, sold its first release of 40 apartments in one day last month. At the recent launch of Cask Store at waterfront Finzels Reach, buyers camped overnight to be first in the queue. There are too many other city schemes to list them all, but of note are The General (pictured above, the conversion of the former General Hospital into 205 apartments, priced from £252,500) and the Huller and Cheese Warehouse on Temple Back, which launches next month, offering a city location and views across a lively section of the harbour at prices starting at £186,000.

Montpelier and Kingsdown
According to Stuart Oliver, of Andrews, Montpelier is the most popular area with buyers moving from London, who are seduced by its boho, multicultural, urban vibe and views of the city from the upper floors of Grade-II listed houses – the latter arranged in hilly Georgian terraces every bit as good as Clifton’s but significantly cheaper. Incoming buyers, he suggests, are also free of preconceptions; locals tend to think Montpelier is a little too inner city.
Kingsdown is its more sedate neighbour, with cobbled streets, larger, finer Georgian houses, garden squares and some the best views across the city centre.

Totterdown and Temple Meads
Totterdown is one of the city’s budget options: an elevated urban village of narrow streets built in the 19th century around the railway industry. The houses tend to be smaller and a little older than in neighbouring Southville, and the area attracts young families and first-time buyers. 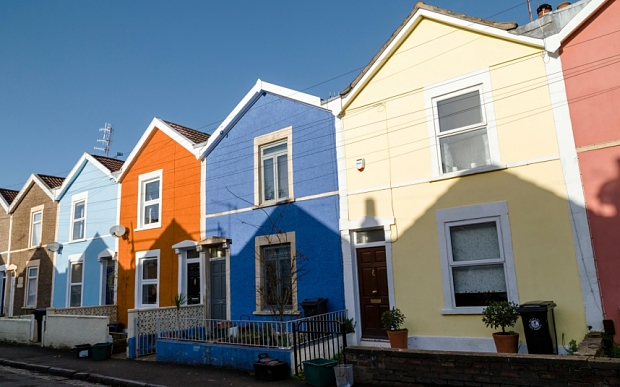 It’s arty, pubby, faintly hippy and hilly – Vale Street is thought to be the steepest residential street in England – but further gentrification is just around the corner. This is one of the closest areas to the station, and when the new electric trains start speeding into Bristol in a couple of years’ time, residents will be able to totter down to Temple Meads in minutes.
Another bonus is the developing Creative Quarter at nearby Paintworks – a riverside industrial estate converted into live-work spaces. Plus the regeneration of the Temple Quarter Enterprise Zone (the scruffy bits around the station) will include the new Bristol Arena. Totterdown’s two-bedroom terraces currently sell for around £250,000; larger houses for £300,000